Does Air Conditioning and Air Circulation On Flights Increase The Spread Of Viruses and Bacteria?

Does Air Conditioning and Air Circulation On Flights Increase The Spread Of Viruses and Bacteria?

With Coronavirus being declared as a public health emergency, there have been multiple concerns with people travelling interstate and internationally on planes and also across oceans on cruises. Multiple airlines are cancelling flights or limiting the number of aircrafts in operation in fears that the virus will spread more rapidly than it has already. According to the World Health Organisation (WHO), there are approximately 125, 000 confirmed cases and 4600 deaths as of 12th March 2020. While these numbers have been increasing steadily over the last few months, some people will still probably travel via air, whether it be for work, a holiday or even an emergency visit to family overseas. Although it may be hard to contain this pandemic, there are definitely ways that you can limit the risk of contracting the virus and spreading it onto your friends, family and co-workers. So if you’re needing to get on an airplane, keep reading. This might shed light on a few things you’re unsure about or just give you an idea of what to expect when you’re in the air.

Let’s find out why.

If you’ve ever flown on a plane, you’ll know that it can sometimes feel like you’re in sub-arctic temperatures. It’s common for people to dress warmly and use the extra blanket provided by airlines because of how cold it can get. But why is that the case? Why are airports and airplanes always seem to have the air con on full blast and make us brave these seemingly awful conditions? While you may experience discomfort, airlines have regulations in place to ensure the wellbeing of the majority of passengers.

With three billion people travelling via air, people are typically concerned about the circulation of air on flights and the increased chance of getting sick. 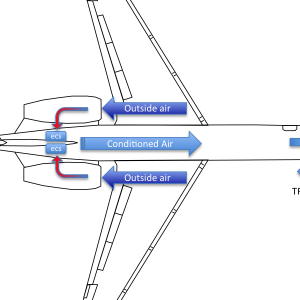 According to Time Magazine, the air is compartmentalised into sections on the plane. Half the air is passed through what’s called HEPA filters while the other half is cycled through from the outside air. Hot air is compressed and passed through heat exchanges and pressures which are then distributed for aircraft ventilation, AC and pressurisation systems. The pressurisation systems are important because there are lower oxygen levels with air at lower atmospheric pressures and so to ensure the air is fine for us to breathe in inside the airplane, the air has to also be conditioned with the air conditioning system or pack. There is a specific science behind the whole process but the air outside is essentially is controlled for our wellbeing and so that the aircraft works while in the air. The air is also controlled to flow through the cabin in a way that ensures proper circulation.

A study conducted in 2019 on testing the bacteria revealed that there is no difference or ‘more risk from 4 to 5 hours spent in an airplane cabin than 4-5 hours spent in an office” which is a relief for those worried about contracting a virus or cold. While the media may sensationalise claims that flight travel will significantly put your health at risk, the study conducted, which corroborates with various other studies, that it is perfectly fine and as long as you maintain standard hygiene practices, there should be no need to worry.

By logic, being in a larger crowd means the per cent of you contracting a virus or infection increases with the same increase in number of people. And while more people means there is a possibility for germs to spread to more surfaces, items and through the air, the previous section has ruled out the idea that longer exposure time means you will get sick. Of course… this all depends on your own current health condition and the severity of the sickness of other people. In all instances, practice good hygiene and be wary of those who are coughing, sneezing or blowing their nose around you in the airport and especially on the flight. 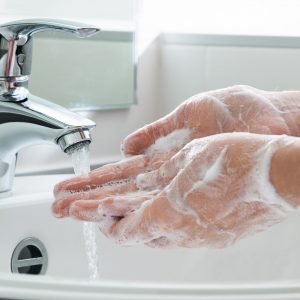 Flying at high altitudes means that the humidity in the air is basically nonexistent. The lack of moisture in the air, much to our skin’s dismay, is due to the fact that cold air can’t hold as much water as warm air. With the combination of the outside air being cold and the inside air also being regulated and filtered so that it is also cold, it leaves little room for any form of humidity.

The effects of low humidity that you might feel include itchy eyes, dry throat and skin as well as itchy or irritated eyes. These factors, unfortunately, can play a part in increasing your chances at catching a cold because it’s known that moisture in your nose and respiratory tract helps keep the mucous membrane lubricated and work to their full potential by keeping allergens at bay. 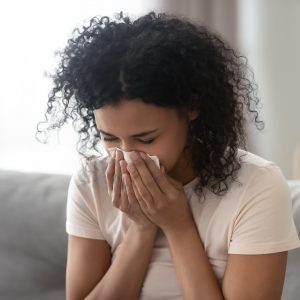 HOW ARE INFECTIONS SPREAD?

Whether it’s viral or bacterial, there are different ways they can be spread from one person to another that can be airborne or waterborne.

– Touching contaminated surfaces
– Coming in close contact with someone who has an infection
– Having contact with bodily fluids from an infected person (kissing, touching, sneeze droplets)
– Sharing food and water

While this can be concerning, most commercial aircrafts have high-quality air filters that are efficient at constantly circulating fresh air from outside back into the cabin. This means that the HEPA filters basically get rid of “99 per cent of the airborne microbes in the filtered air”.

Essentially, air conditioning and the air being cycled through the cabins does not increase your risk of viruses or contracting bacterial infections. What does increase the risk is mainly poor hygiene or having an existing condition which makes you more susceptible to infections. In light of this, it’s important not to stress about travelling via air and that there are measures put in place, like the air filtration system, to minimise any disease from circulating through the aircraft.

Does Air Conditioning and Ai...

The history of the air condi...